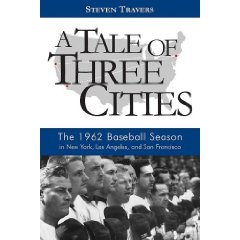 1962 was also one of the greatest years in the history of sports; a particularly great California sports season in which the Southern California Trojans won the national championship in football, the recently-arrived Los Angeles Lakers started their famed rivalry with the Boston Celtics; and the transplanted New York teams, the San Francisco Giants and Los Angeles Dodgers, intensified their rivalry in ways never even seen back east.
In one of the greatest pennant races of all time, the Giants survived to overtake the favored Dodgers, only to face the winner of New York’s war of baseball attrition, the fabled Yankees, in a classic World Series for the ages. While all of this was going on, events were taking place in Washington, Moscow and Cuba that would have profound consequences on the Cold War and beyond.
The easygoing Beach Boys persona of L.A., the last vestiges of San Francisco sophistication, and the final throes of Sinatra swank in the Big Apple, were threatened by the Earth-shaking fact that the Soviets were planting missiles in Fidel Castro’s enslaved Communist Cuba. While baseball games were being played, a deadly serious chess match was fought between President Kennedy, Castro and Soviet Premier Nikita Kruschev.
Here are the heroes: Mickey Mantle and Whitey Ford; Willie Mays and Willie McCovey; Sandy Koufax and Don Drysdale. Here is Hollywood adoration of the Dodgers; San Francisco’s psychic battle between inferiority and superiority; and New York: the New Rome, rulers of sport and society. We see the Angels in the “Sunset Strip summer” of ’62; across the continent, the comical Mets as a sideshow; and of course, the “missiles of October.”